Deeper Than the Headlines: Post-Acute-Care Transfers Led to Millions in Inappropriate Payments

Deeper Than the Headlines: Post-Acute-Care Transfers Led to Millions in Inappropriate Payments

The OIG’s most recent audit work and the accompanying report outlines how hospitals have been incorrectly reimbursed for improperly billed claims by using an incorrect patient discharge status code. Ultimately, the OIG concluded that Medicare improperly paid acute-care hospitals $54.4 million for 18,647 claims subject to the transfer policy.

The OIG conducted the review based on prior work that identified almost $242 million in overpayments to hospitals that did not comply with Medicare’s post-acute-care transfer policy. Hospitals that were previously audited transferred patients to certain post-acute-care settings (such as a SNF), but claimed the higher reimbursements levels associated with discharges to the home. Because compliance with the transfer policy has been an issue over a long period of time, the OIG decided to conduct a follow up review to evaluate whether Medicare properly paid acute-care hospitals’ claims. Their objective was to determine whether Medicare properly paid acute-care hospitals’ inpatient claims subject to the transfer policy.

Over the course of this recent audit, the OIG examined 18,647 claims. The hospitals coded these claims as discharges to home (16,599 claims) or to certain types of healthcare institutions (2,048 claims), rather than as transfers to post-acute care. Of these claims, 83 percent were followed by claims for home health services, and 17 percent were followed by claims for services in other post-acute-care settings. Medicare makes the full Medicare Severity Diagnosis-Related Group (MS-DRG) payment to an acute-care hospital that discharges an inpatient to home or certain types of healthcare institutions.

In contrast, Medicare pays an acute-care hospital that transfers a beneficiary to post-acute care a per diem rate for each day of the beneficiary’s stay in the hospital. The total overpayment of $54.4 million represented the difference between the amount of the full MS-DRG payments and the amount that would have been paid had the per diem rates had been applied.

The OIG shared the following infographic from their review, which visualizes the issue at hand. 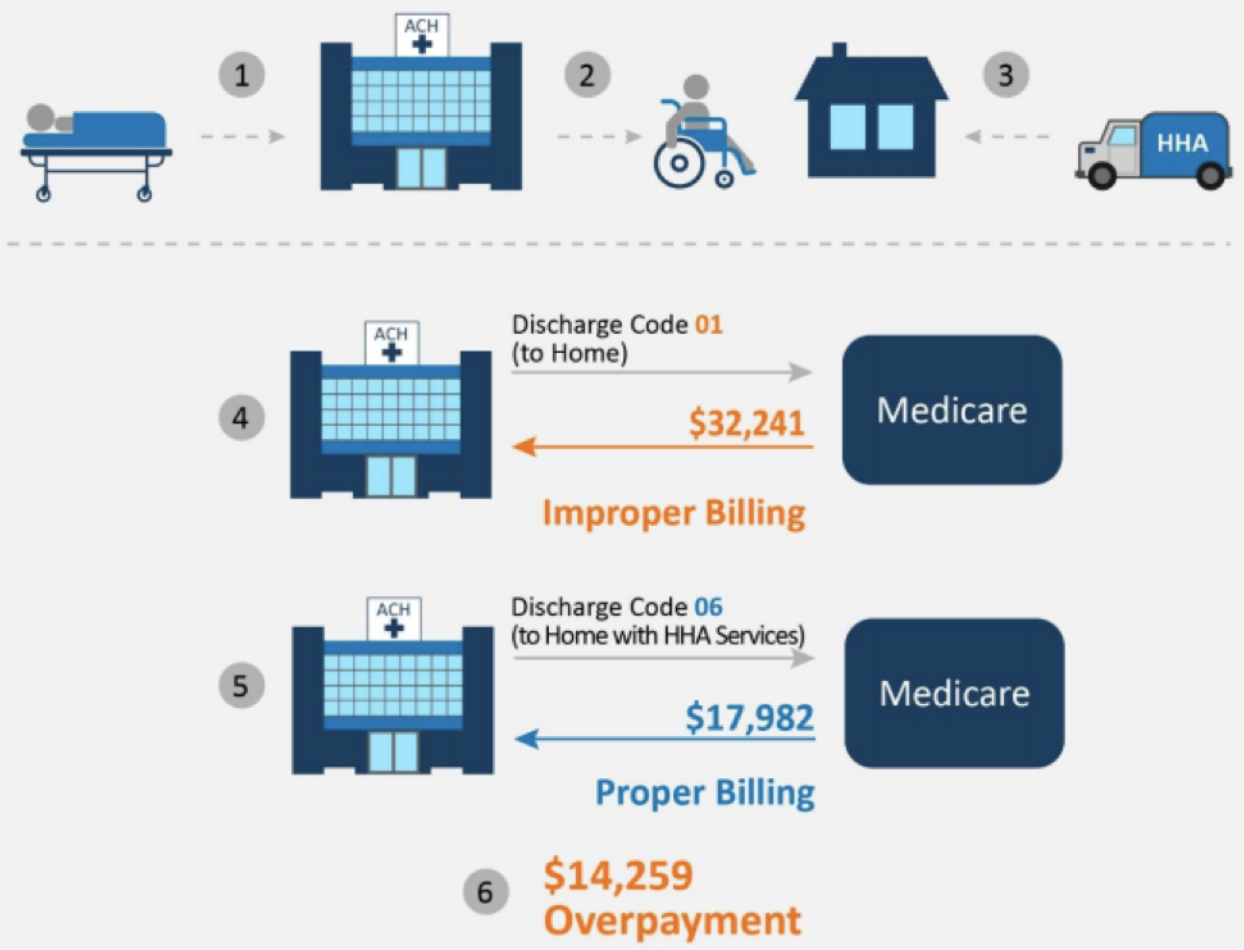 In response to these findings, CMS officials stated that the edits appropriately detected inpatient claims subject to the transfer policy. However, some Medicare contractors reported that they did not receive the automatic notifications of improperly billed claims, or they did not take action on those claims. If all of the contractors had received the notifications, and properly taken action since calendar year 2013, Medicare could have saved $70 million.

The OIG ultimately recommended that CMS direct the Medicare contractors to:

CMS in turn agreed with the OIG recommendations and proceeded to provide information on the actions that it planned to take. So, if your compliance program hasn’t taken a look at this issue within your organization, it might be wise to put a similar review of discharge codes on your compliance workplan.

How to Ensure Compliance During (and After) a Crisis

Your Questions on the OCR’s “Notification of Enforcement Discretion for Telehealth,” Answered.